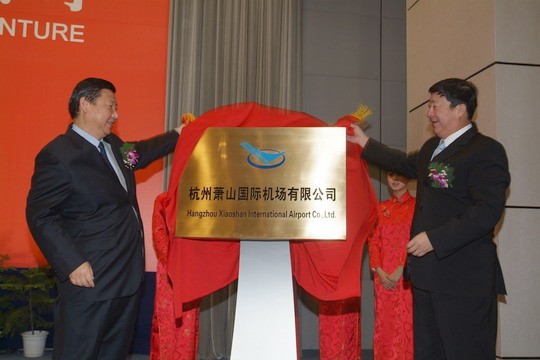 China's first foreign joint venture airport, Hangzhou Xiaoshan International Airport, was formally established on December 18th. The joint venture party is the Hong Kong Airport Authority with the reputation of being the best airport in the world. Consumers are most concerned that this Hangzhou-Hong Kong marriage can Will it really transform a mainland airport into a world-class airport and completely transform the "grandfather" style of the civil aviation airport?

The newly formed Xiaoshan Airport is a joint venture between China and Hong Kong. Hangzhou Xiaoshan International Airport Co., Ltd. is funded by the entire net assets of approximately RMB 3,695.9 million, accounting for 65% of the equity of the joint venture company. The Hong Kong Airport Authority has invested RMB 1.99 billion in the form of Hong Kong dollar cash. 35%.

The second phase of the project, which will be carried out immediately after the establishment of the joint venture company, will double the existing Xiaoshan Airport area, add a second runway that can carry Airbus 380, and establish a centralized tax, customs supervision, warehousing and comprehensive according to internationally standardized standards. The modern logistics park with services and information equals the throughput, which will increase to 25.6 million passengers per year, 500,000 tons of cargo and 260,000 flights.

The participation of Hong Kong Airport in Hangzhou Xiaoshan Airport has a far-reaching impact on the airport competition pattern in the Yangtze River Delta and the Pearl River Delta. It is understood that after the signing of the joint venture intention between Hong Kong and Hangzhou in April last year, the number of flights between Hangzhou and Hong Kong has increased from ten flights per Saturday at the beginning of last year to 140 flights per week. The surge in such flights has occurred in the context of the rapid development of Guangzhou Baiyun Airport, which constitutes an impact on the passenger flow of Hong Kong airports.

Figure 2: The establishment ceremony of the joint venture of Hangzhou Xiaoshan International Airport, a joint venture between China and Hong Kong

According to the analysis, Xiaoshan Airport ranks third among the 30 airports in the Yangtze River Delta. Following the Shanghai Pudong Airport and Hongqiao Airport, the second phase of the expansion project, logistics park construction and international routes will be carried out immediately after the joint venture with Hong Kong. The increase will significantly increase the status of Xiaoshan Airport in the international airport, and it is very likely that Xiaoshan Airport will become the "second child" in the airport in East China.

Although Hong Kong Airport ranks first in the world in terms of international cargo volume for the past ten years, and international passenger transport ranks fifth, with the economic development of the mainland, Hong Kong-funded enterprises move northward, and the future three links of the mainland and Taiwan are likely to be realized. The status of the bridgehead is constantly weakening. The development potential of the Hong Kong airport in Hong Kong has reached its limit. Therefore, it is an inevitable choice for the Airport Authority of Hong Kong to find a "spokesperson" in the Mainland and use the mainland network of the civil aviation airport to penetrate the hinterland and expand new space.

Experts believe that the joint venture between Hong Kong and Hangzhou has made the competition between the Yangtze River Delta and the Pearl River Delta airports more intense. The most obvious is that after the addition of more international direct flights to Xiaoshan Airport, it will inevitably weaken some of Shanghai's tourists. However, experts pointed out that Xiaoshan Airport is only partially a substitute for Shanghai Airport and cannot be completely replaced.

In addition, some experts have doubts about the grand plan of Xiaoshan Airport. With the completion of the Hangzhou Bay Bridge, the sea passage between Ningbo and Shanghai was opened; with the opening of the Shanghai-Hangzhou Maglev, the distance between Hangzhou and Shanghai will be shortened from the current one-and-a-half-hour journey time to dozens of minutes, when Xiaoshan Airport and Shanghai will be opened. The attractiveness of the airport to passengers will not only be determined by geographical factors.

The greatest confidence that the joint venture company brings to the domestic civil aviation industry is the introduction of Hong Kong's management level. Chen Haimei, chairman of Xiaoshan Airport, said that among the 11 members of the board of directors of the joint venture, there are 7 directors in China and 4 directors in Hong Kong. The general manager is headed by Huang Weilin, general manager of the passenger transport business of the Hong Kong Airport Authority. The four deputy general managers also have One is from Hong Kong. The Hong Kong team led by Huang Weilin has many other experienced executives.

Chen Haimei said that there are more than 140 international routes in Hong Kong Airport, and there are currently only 8 Xiaoshan Airports. Xiaoshan Airport is the international transportation network resource that Hong Kong Airport extends in all directions. It is understood that Huang Weilin started the development of the direct flight between Hangzhou and Europe on the first day of his appointment. It is expected that within one to two years, passengers in Hangzhou can fly to Europe without having to borrow Shanghai.

At the press conference, a reporter asked if the â€œaristocratic consumptionâ€ phenomenon of a bowl of noodles of 50 yuan would disappear from Xiaoshan Airport after the introduction of the management method of Hong Kong in the joint venture airport.

Peng Dingzhong, chief executive of the Hong Kong Airport Authority, said that the key to solving these problems lies in the introduction of competition mechanisms. The flight between Hangzhou and Hong Kong has only two airlines and four flights six years ago. Now it has increased to ten flights per day for four airlines. As long as consumers have enough choices, with the permission of the Civil Aviation Administration, The price of the ticket will naturally come down.

Chen Haimei, chairman of Xiaoshan Airport, said that Hong Kong Airport has been named "Best Airport in the World" by the British Independent Aviation Survey for five consecutive years and is one of the busiest airports in the world. The joint venture between China and Hong Kong will bring about a significant improvement in the management and international status of Xiaoshan Airport. Xiaoshan Airport also plans to list in Hong Kong.

Where is the civil aviation airport reform road?

At the time of the successful joint venture between Xiaoshan Airport and Hong Kong Airport, the joint venture undercurrent of the domestic civil aviation airport has been surging for a long time.

Yang Yuanyuan, director of the State Administration of Civil Aviation, said that as China's first joint venture airport, China and Hong Kong's attempt to explore the diversification of airport property rights in China's civil aviation industry is of far-reaching significance. Yang Yuanyuan said that China's civil aviation has become the world's second largest air transport system. The next step is to transform the country from a major aviation country to a strong aviation country. The level of cooperation with foreign capital will be the direction of civil airport reform.

It is understood that after the implementation of the "Regulations on Foreign Investment in Civil Aviation Industry" in August 2002, the restrictions on foreign investment in China's airport construction have been very small, limited to some specific requirements on the proportion of investment: for example, some large-scale trunk airports need to be controlled by the Chinese side. Small and medium-sized regional airports can be controlled by foreign companies.

At present, there are more than 130 civil airports in China, and many airports have expressed interest in joint ventures and equity transformations. In particular, airports in East China and South China have shown a trend of seeking cooperation with foreign investors. For example, the airports in Shenzhen, Ningbo, Wenzhou, and Nanjing have all reported cooperation with foreign investors, and some have entered the practical stage of operation. The State-owned Assets Supervision and Administration Commission of Liaoning Province has officially announced that the Liaoning Airport Management Group Corporation will carry out the shareholding system transformation and hope to seek cooperation from overseas investors in the equity transfer.

However, the situation of attracting foreign investment is not optimistic. The reason why foreign-funded enterprises can not make up their minds to cooperate with certain airports, some airports are weak, and the prospect of profit is blurred. Hong Kong Airport Authority Chief Executive Peng Dingzhong once said, "The airport we are investing in must have a 20% passenger traffic, or at least 15% growth, to ensure that our investment is worthwhile."

According to the analysis, the break-even point of the investment airport is that the passenger traffic reaches 2 million passengers per year. At present, there are more than a dozen domestic airports that have reached this level, and 80% of the airports have no profit.

The analysis believes that Xiaoshan Airport, which was put into use in 2000, can successfully negotiate a successful joint venture with Hong Kong Airport in a very short period of time. The key lies in its clear profit prospects. It is understood that Xiaoshan Airport has maintained a growth rate of 30% of passenger and cargo throughput in the past six years. Passenger and cargo throughput ranks third in East China, second only to Shanghai Pudong Airport and Hongqiao Airport.