[May Point Network] As the schedule of the World Cup in South Africa approaches, the sports brands, big-screen TVs, beer, sports lottery, catering and other businesses around the world are already the first to win...

Recently, the reporter learned that South Africa's unique tourism resources and the charm of football make it a hot tourist city in the world. Many domestic travel agencies have launched travel teams such as the World Cup tour and free travel packages, and major airlines have also made a big splash on the theme of watching the World Cup in South Africa. South Africa is taking this opportunity to open a personal tourist visa for Chinese tourists.

Visa is easy to live in.

At present, the South African Embassy officially opened a personal tourist visa fee of 560 yuan, allowing Chinese tourists to travel to South Africa in their own name. Interested parties can apply for a personal tourist visa at the South African Embassy. It is understood that the current signing to South Africa is relatively easy, but the whole game is difficult to guarantee, the signing must pay a repatriation deposit of 15,000 yuan. However, from the perspective of law and order, it is recommended that domestic fans try to travel with the group.

Since the number of hotels in South Africa is not much, it is easy to imagine that a bed is hard to find during the World Cup. According to a message from the South African Tourism Department, South African hotels are nervous because 80% of all five- and four-star hotels are currently being booked by FIFA to meet the needs of high-end customers, even if they are from Johannesburg. An hour-long tourist city, Sun City, three five-star hotels will only serve FIFA in June this year.

The travel agency is on fire

Since the end of May, with the price of local hotels and air tickets in South Africa all the way, the South African line organized by domestic and foreign travel agencies has also shown a trend of rising prices. The trip to South Africa has performed well this summer.

The reporter learned from a number of travel agencies in Shanghai that the World Cup has launched a series of expensive tour groups to meet the fans' demand for â€œviewing + sightseeingâ€. At present, the average group fare for the regular viewing group (conventional itinerary + one World Cup group match day) has reached about 30,000 yuan, which is twice as expensive as the usual line travel on weekdays.

Zhou Xiaoqing, the person in charge of the international tour of Shanghai Southeast Travel Agency, told the reporter that the current World Cup tour group's offer price is mostly concentrated at 23,800 yuan to 34,000 yuan, and the itinerary is 8 days. The price is determined according to the specific World Cup events.

"In fact, there are many people who have consulted by phone during this time, but there are very few people who actually enrolled. Six of us can set up a group, but in fact, it is very difficult for six people to get together. Local hotels and air tickets. The cost of the ground connection has all increased, and our travel agency has no way to follow the price increase. In the past, like 10,000 yuan, we can arrange for guests to live in a 5-star hotel, but now it is more than 30,000 yuan. Stayed at a 4 star hotel." Zhou Xiaoqing said helplessly.

However, there are also fans with strong economic strength who can afford it. The head of the CYTS Business Department of the CYTS told reporters, â€œWe have a departure on July 9th, specifically for the World Cup finals, the award ceremony, and the wonderful closing ceremony. At present, the 8-a-side "African 8th World Cup Tour" 30-person group with a price of 58,000 yuan will depart from Shanghai on July 9 and only go to Johannesburg. The number of applicants is almost full, at any time. Will be full." (China News Network)

1. GTO Database has no limitation on products and country searching.

2. GTO database will be available for more than thirty countries, details as the following table.

3. GTO database is easy for any Report generating.

4. GTO database can be searching according to company name, product description, hs code and so on. 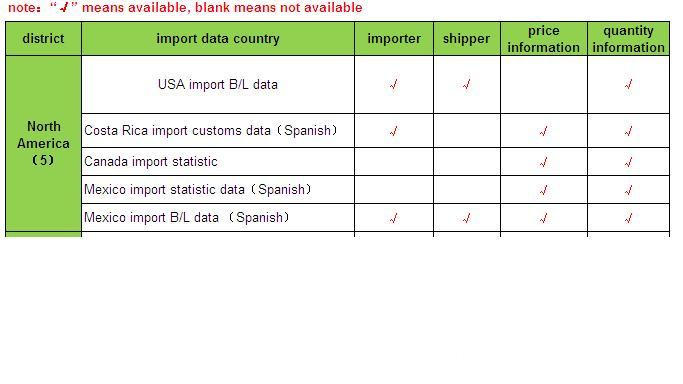