Virgin Galactic Aerospace, a subsidiary of Virgin Group, said on the 22nd that the companyâ€™s manned spaceship, Spaceship II, completed the maiden voyage in the California desert... 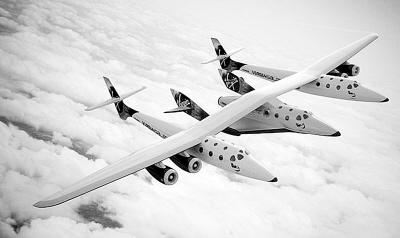 Virgin Galactic Aerospace, a subsidiary of the British Virgin Group, said on the 22nd that the companyâ€™s manned spaceship, Spaceship II, completed the â€œvirgin flightâ€ in the California desert and succeeded. Although it only sailed for less than three hours, it is a big step forward in realizing the dream of human beings swimming in space. The company said that the test flight will be carried out until the end of 2011 and commercial space tourism is expected to start in 2012.

According to the British "Times" reported on the 23rd, "Spacecraft II" continued to fly for 2 hours and 54 minutes under the guidance of the mother ship "White Knight II", flying at a height of about 14,000 meters, and then both "joined" back Located at Mohave Space Station, 112 km north of Los Angeles.

"Spacecraft II" and the mother ship "White Knight II" are the second generation spacecraft designed by Rutan. Spaceship One is an aerospace aircraft developed by Scaled Composites, founded by Rutan. On June 21, 2004, "Spacecraft No. 1" completed the first private capital human space flight, opened a new chapter in human space flight, and made the dream of ordinary people swimming in space into reality.

"Spacecraft II" was jointly developed by Richard Branson, the head of the British Virgin Group, and the scale compound company. They are also developing launch vehicles carrying passengers. "Spacecraft II" can carry two crew members and six passengers, and is expected to become the world's first commercial spacecraft.

Virgin Galactic Space Company, which promotes the space tourism business under the Virgin Group, said that the test flight of Spacecraft II will continue until 2011, and commercial space tourism will be officially launched in 2012. The sailing time is 2 hours and 30 minutes. Passengersâ€™ trips cost $200,000, and more than 300 have now paid deposits. The company expects that after five years of operation, the price will be greatly reduced, allowing the space journey to "fly into the homes of ordinary people."

At that time, the mother ship "White Knight II" will send "Spacecraft II" to an altitude of about 50,000 feet (about 152,000 meters), and then release it. The "Spacecraft II" was driven by a rocket engine. The two crew members, with six passengers, crossed the edge of the atmosphere and briefly experienced zero-gravity conditions, overlooking the beauty of the Earth, and then gliding and landing.

According to the US "New York Times" reported on the 22nd, in order to become a passenger of Virgin, in addition to preparing for $200,000 in cash, it also accepts the weightless state training provided by Virgin Galactic. Because even the American and Russian astronauts will have dizziness, vomiting and other reactions when they first do weightless training, and ordinary people are less likely to adapt.